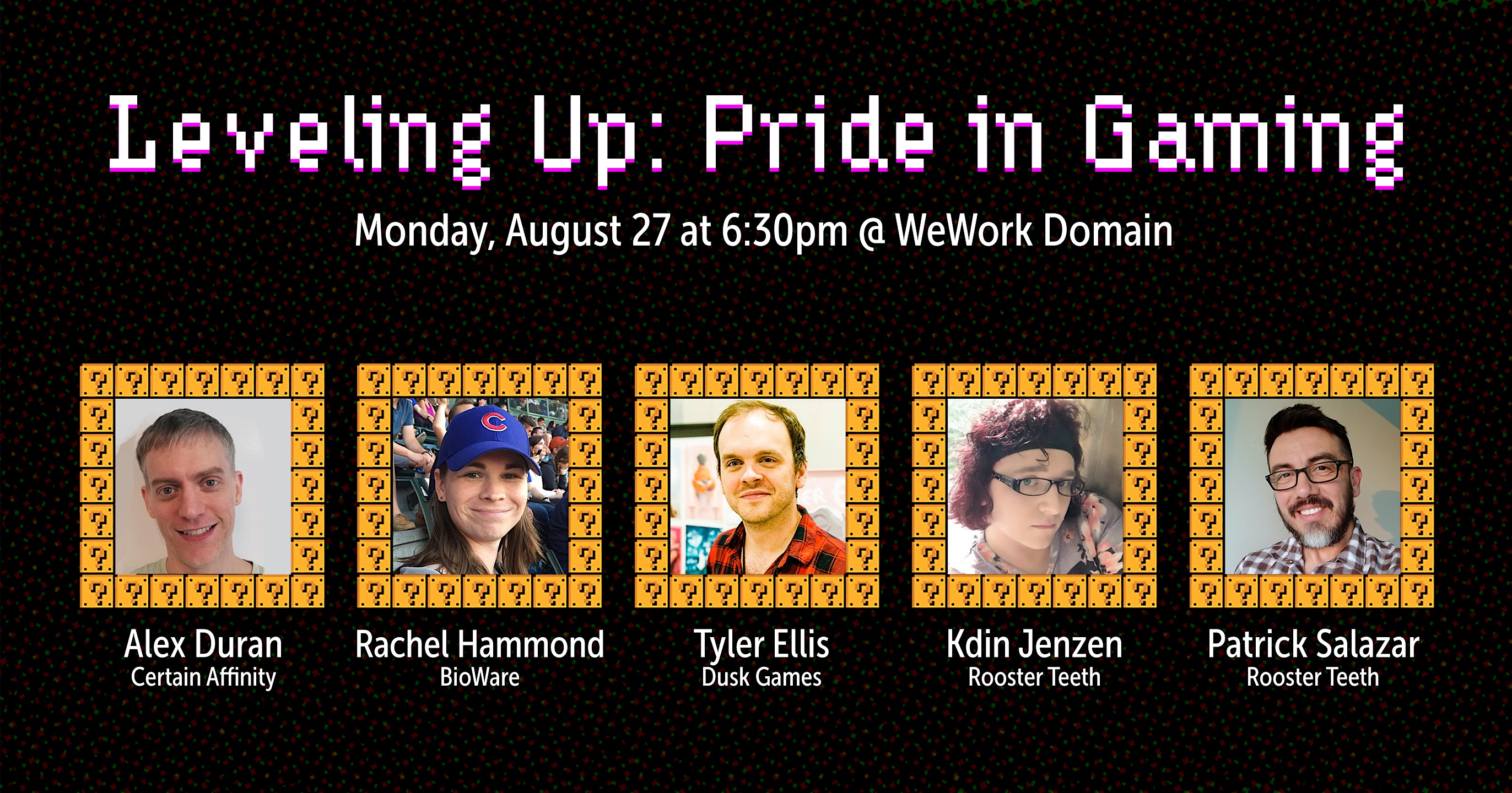 Out in Tech ATX: Leveling Up – Pride in Gaming

Diversity & inclusion in the gaming industry is (shocker) still not where it should be, both within the games and the places that create them.

Join us on August 27th for an all-star panel of out and proud individuals & allies working in the gaming industry to discuss recent trends within the industry and queer culture in gaming.

Free drinks & snacks courtesy of WeWork.
21+ to attend. RSVP required but free.
There is a $5 suggested donation that will go toward funding Out in Tech’s impact programs.

Alex Duran, Sr Advanced Engineer at Certain Affinity
Alex has been worked in games for 19 years, and apart from a brief stint in QA at the start of his career, always as a gameplay or engine programmer.  He got started at Looking Glass Studios before moving back home to Austin in 2000, where he’s worked ever since.  During that time he’s worked primarily on AAA games for console & PC.  He currently works at Certain Affinity where he works on the engine and tools used by internal game teams.  Outside of work he and his husband of 8 years take care of their 3-year old twins.

Rachel Hammond, Gameplay Programmer at BioWare
Rachel Hammond is a game programmer with more than 10 years of experience developing games across a variety of consoles, ranging from the Game Boy Advance to the Play Station 4. She currently works as a gameplay programmer at BioWare and spends her free time taking pictures of dogs and practicing krav maga (Though not at the same time).

Tyler Ellis, Art Director at Dusk Games
Tyler is an illustrator and concept artist working out of Austin, TX. Focusing on progressive representation in entertainment media, his comic series ‘Chimera’ was nominated for the Dwayne McDuffy Diversity Award. He currently works for Dusk Games, where he serves as Art Director.

Patrick Salazar, Director of Broadcast at Rooster Teeth
Patrick leads video podcast development and production at the Austin and LA Roster Teeth locations. He re-engineered their livestream capabilities into a technically innovative broadcast studio for their digital programs. Patrick manages a team that produces 1,000+ hours of content/year. Him and his fiancé, Don Vail, plan to marry in September.

Special thanks to our host:

Diversity & inclusion in the gaming industry is (shocker) still not where it should be, both within the games and the places that create the